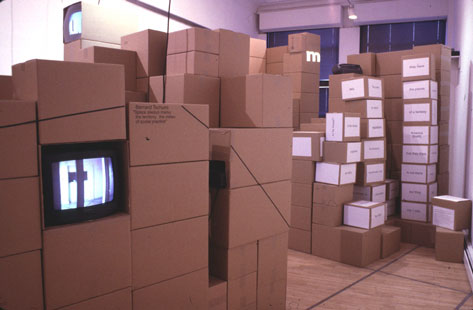 New York City Medley was my contribution for the exhibition “block” at Apex Art in New York City in March/April 2000.

For New York City Medley I cut-up seven songs and re-interpreted their lyrics. The songs are dealing with New York City as a subject in the lyrics and/or are characteristic for a ”New York City sound”. Some of the used material is well known like “New York City Boy” by Pet Shop Boys, “Hey Manhattan!” by Prefab Sprout, “The Message” and “New York New York” by Grandmaster Flash and the Furious Five, some of the material is not that popular like “Dance” by ESG, “Bowery Boy” by Free Kitten, and “My My Metrocard” by Le Tigre (that song was a comment on mayor Giuliani’s “zero tolerance” policy). According to the political changes in Austria at that time - the conservative party OEVP formed a government with the right wing party FPOE - I changed the lyrics of the Le Tigre song from ”Oh fuck - Giuliani - He's such - A fucking jerk - Shut down - All the stripbars - Workfare - Does not work” into ” Oh fuck – The new government- They are - Such fucking jerks - Shut down – The women’s ministry - Workfare - Does not work”. And of course I made Pet Shop Boys’ New York City boy a girl. (Christiane Erharter)

More info on the exhibition:
Apex Art, New York
Block at The Selection